On April 29, 1992, civil unrest broke out throughout Los Angeles after the acquittal of police officers involved in the Rodney King beating. The response revealed deep chasms between the local government and many of its constituents.  We invite you to join us as we commemorate the 25th anniversary of the L.A. Civil Unrest.

We will reconvene in the afternoon for a forward-facing event where elected officials and elder community leaders will participate in an intimate roundtable discussion with young people born during or shortly after the 1992 Civil Unrest in an effort to elevate the young people's voices as they share their experiences with one another and elders.

Lunch and parking are included.

There is limited availability for this event.  This invitation is non-transferable.   RSVP is required.

Sponsored by the Office of Mayor Eric Garcetti & 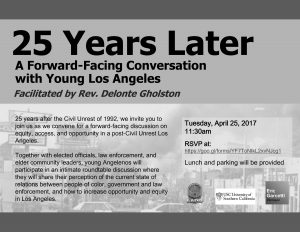