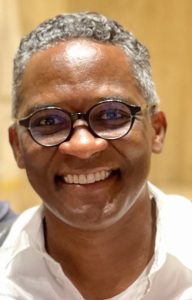 Thirty-five years ago, I committed a crime: I was involved in the murder of a young black man – a casualty of the crack epidemic. I too, as a young black man, was a victim of this era: easy money, ambition, and a lack of direction was a dangerous combination, especially in 1980s South Los Angeles.
I remember the surreal experience of my arrest: I was cocky enough to think I could beat the case. I did not know that the detectives had seen a thousand me’s and had heard enough BS stories to see through mine. The blinding light of consequence turned on when I saw my grandfather – the gentle, quiet man who used to talk about faith with me over morning coffee - cry in a gray, indifferent police interview room. The illusion of dodging the charges was gone: I felt the swelling panic of consequences. I remember closing my eyes and swearing – with everything in me – that I would NEVER be here again…NEVER do this again…NEVER put anyone in this position again. I determined, in that moment, to redeem myself and the legacy of my grandparents through good works. I would pay for the generations lost from the murder of my victim.

have done my best over these last 35 years: I’ve become a Pastor, consistently served my church, dedicated my life to nonprofit reentry, workforce, and violence prevention work, and raised a beautiful family with three successful children. My work has been honored by politicians, I have advised leaders, and have helped thousands of individuals returning home from custody.

But here’s the catch: the desire for redemption is an unquenchable thirst. I never feel a moment of being “done”: each phone call, each need, each person asking for help wakes me up and moves me to act. I am a karmic Sisyphus who is continuously carrying the load up the mountain. I am a debtor and debtors never get to rest.
Thirty-five years after my crime, I was invited, as a a clergy partner of the Live Free gun violence initiative, to the White House to join President Biden and a group of national leaders to celebrate a historic gun bill that is remarkable not because it goes far enough but because it is the first bill to unstick a policy cemented in party politics. Finally, the blood crying out from the streets has been heard and we have realized that we can, in fact, move an inch toward a rational gun policy.
I was overjoyed to attend, both for the historic moment and because invitations into elite and powerful spaces make me feel like maybe I’ve done was I was supposed to do…maybe now my redemption is complete. Yet, it was not to be: the secret service read my life on a small computer screen and concluded that I was too dangerous to be in the room. The crime overshadowed 35 years of good works; in an instance, I was once again the young black man who felt the gut-punch of shame and consequence.
In America, when is time really done? The 5th Amendment of the Constitution specifically bans double jeopardy (being tried twice for the same crime): “…nor shall any person be subject for the same offense to be twice put in jeopardy of life or limb.” When I committed my crime, I accepted my sentence as just and appropriate. As the saying goes, if you do the crime, you do the time. I didn’t know that, for felons, the time is never done: every job application, every license, every security screening would require me to talk about my crime and justify my rehabilitation. How often do other citizens have to relive and be held to account for their darkest sins?
My crime was not trivial: it was serious, permanent, and a breach of the social compact. But I ask, in this era of criminal justice reform, diversity, equity, and inclusion, and community-based violence interruption, whose voice matters? Who is invited to the table? LARRP’s philosophy of social justice is that those closest to the problem HAVE to be at the table where decisions are made. For me, and four other committed community leaders from across the country (all black, I might note), we were denied this justice. Our voices that carry the whole story of pain, compassion, understanding, reflection, AND redemption, were silenced. When is time done?
Posted in Uncategorized