Did you feel it?, Reentry got shaken up! 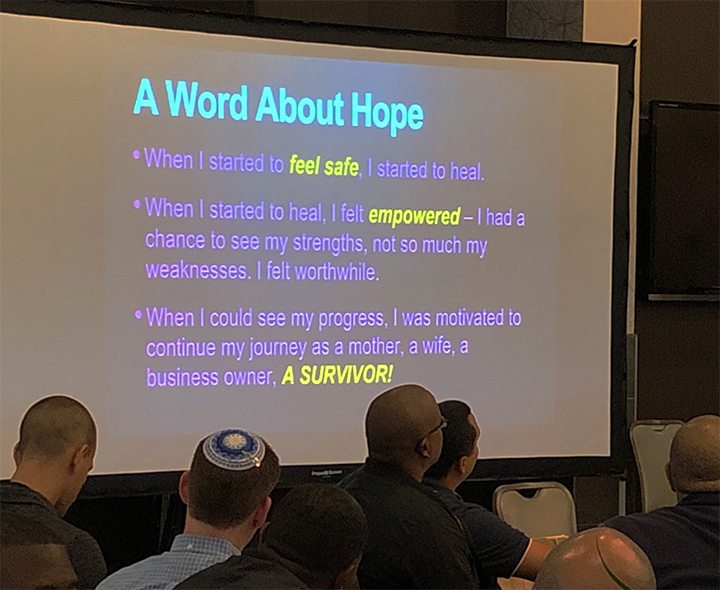 It was an inspiring day!

On May 30th, 2019, nearly 1000 Los Angeles County reentry stakeholders gathered in Montebello, CA for the first ever regional reentry convening, hosted by the LA County Probation Department and supported by LARRP. The “Shaking Up Reentry” conference represented a launching point for a new government-community relationship and mutual commitment to work more collaboratively to solve our most pressing reentry challenges using a trauma-informed approach.  Making space and lifting up the voices for those who have been impacted as leaders in this field was another underlying theme through all the sessions. This conference sought to address two overarching questions: what are we doing well? And what do we need to work on? 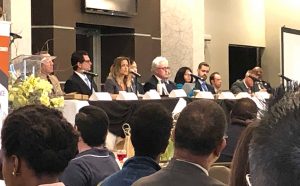 The Chief’s Panel kicked off the conference, setting the tone for an open and honest dialogue, and sharing their vision for the future of Reentry and their agency’s commitment. Moderated by Probation Chief Terri McDonald, with a dozen Chiefs, including DMH Director Jonathan Sherin, Sheriff Alex Villanueva, DA Jackie Lacey and Public Defender Ricardo Garcia. Otto Solorano, Director of Workforce and Aging for the County, talked about 50,000 new jobs that need to be filled across our region. Chief McDonald posed the question ‘what creates peace?,’ and provided her answer, “people who are healed.” 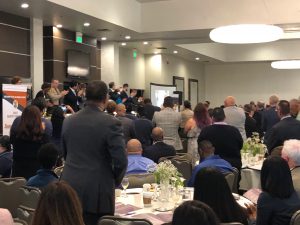 Our own Troy Vaughn, co-founder and ED of LARRP, wrapped up the opening panel, recounting his time in a cardboard box, and his drive to help others facing those life circumstances. Troy called us all to get to work to truly remove these barriers to reentry, saying there is “no more time to play.” 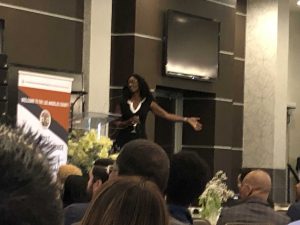 Tonier Cain-Muldrow, the keynote speaker, wowed the audience with her wit, humor, and dignity as she shared her inspiring story of making it to freedom and recovery after childhood rape, abuse and neglect, leading to 83 arrests, 66 convictions, dozens of prison stays and numerous drug treatment programs. Toni conveyed a powerful message reminding attendees that their work matters and expressing gratitude for motivated workers in this field who cared about her well-being, and helped her realize the potential she had to wear a variety of hats, to become an advocate, producer, talk show host, author, and more. 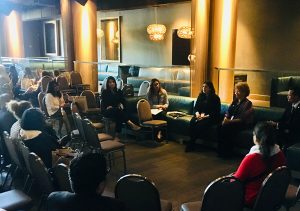 The excitement continued into the breakout sessions after lunch, featuring panels that included an impacted person, a CBO representative, and a government agency, covering multiple topics affecting reentering citizens. Break-out sessions did a deep dive on employment, sustainable housing, credible messengers, gender approaches, the importance of medical treatment and creating a “whole-person” approach, utilizing better service quality performance measures and accountability in organizations. Featuring a broad range of government and community expertise, the Civic Engagement session was divided into four tables, tackling the PRIT, record changing clinics, voting rights, and building the advocacy side of the reentry movement.

The closing panel was moving and powerful as four giants in our reentry community, Susan Burton, Shaka Senghor, Troy Vaughn, and Reaver Bingham, had an honest and difficult conversation about accountability and redemption in the long arc towards justice. 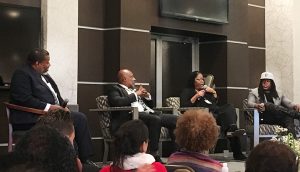 Everybody played their role in the age of mass incarceration, and all of us has a role to play in the dismantling of this most inhumane and devastating government program.
Let 2019 be the year we truly “shake up reentry,” working together to help the greatest number of returning citizens have a true second chance that is paved with our collective resources and love.
Posted in Troy Vaughn Posts, Uncategorized