LARRP was proud to participate in National Expungement Week by hosting a free legal clinic at LA Trade Tech College last Sunday October 27, as part of a Cannabis Expo organized by the National Diversity and Inclusion Cannabis Alliance (NDICA), which seeks to help people of color and other impacted communities enter the booming cannabis industry. 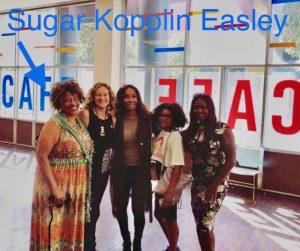 By Sugar Kopplin Easley
September 8, 2018 was the first of many great days to come. It was the day I received assistance changing my criminal record and reclaiming my life back from a decision I made decades ago while experiencing a bad marriage coupled with domestic violence. Today, with the assistance from the LA County Public Defenders, at a free legal clinic organized by LARRP and NDICA, I would finally be able to put that past behind me, get my paperwork done to expunge my records once and for all. No longer would I have the stigma of being a criminal. No longer would I have to check that box on employment applications because I chose to remove myself from a domestic violence situation. Today, I would begin anew, have a fresh start.
After arriving at the expungement clinic held at Holy Trinity AME in Long Beach, signing in, and finding a seat, I began to chat with others who were there for the same. Our purpose: expungement. It was as if we were all in unison. Our desire to experience change, to have a fresh beginning, some hope of having a better life than the one we were currently experiencing was something I surely could look forward to. After much time spent filling out paperwork, speaking with the attorneys and having case paperwork processed and explained, my court filings were prepared and District Attorneys (DAs) were ready to be served.
When I arrived home, I made the calls and started the process of filing and serving. It was at that time I decided to also attend the hearings, even though I was told it wasn’t necessary. I just wanted to be a part of the process. I felt it was important. After all, this was something that has been plaguing me for decades. Why wouldn’t I want to be there to hear what is being said? I knew I wanted them to see who I was, just as much as I wanted to see who they were. Who were these people who had been controlling the way I exist in society – at least on paper?
I received the notice from the courts with the hearing dates. October 10th – Expungement #1; October 12th – Expungement #2; Expungement #3 – TBD.  I prepared to go. I took the time to write down what I’ve been up to, should I have a moment to tell. I felt it was necessary to let them know that, although these cases had a negative effect on my financial capabilities, and at times I have needed to receive public assistance, I was able to give back to my community by volunteering for the California PTA as a fundraiser and two year term President, bringing much needed funding to local schools; that I am also a social justice activist helping to connect, organizing parent groups and neighborhood associations so students could complete their required community service; and organizing other PTA’s to collaborate on local Measure TT (2008) bringing over $171 million to renovate our school campuses.
After PTA, I got involved with a local collective, returned to school, learned about mass incarceration and started volunteered for Drug Policy Alliance (DPA) to help bring about change dismantling the war on drugs; winning two scholarships from DPA to attend the 2015 and 2017 International Drug Policy Reform Conference, with the great opportunity to lobby on Capitol Hill for bills to reduce overdose deaths and end federal cannabis prohibition. I also volunteered and supported Prop 64 and attended the 2016 Democratic Convention. I am a social justice activist for criminal justice reform and cannabis social equity. I was prepared, just in case.
Upon attending the first Expungement hearing, I was met by the Public Defender, who was surprised to see me. Most people don’t show up. He was impressed that I not only showed up but wanted to be a part of the process. He represented me. I didn’t get to speak but I was there. It was empowering. And, most of all, I was granted my expungement. I was excited and ready to celebrate but I knew this was just the beginning, that I had two more before my job was complete. So, I had gelato to celebrate. That was good enough.
On Friday, I showed up again for Expungement #2. This time, no Public Defender. Just me, the District Attorney and the Judge. All went well. I even got to tell my story. What a feeling it was to be able to stand before the judge and all who had judged me before, to let them know I was nothing like what they thought, that I was better than anything they could have assumed. When the judge said that he was impressed and he “couldn’t wait to see what I do without a record,” I felt like I had accomplished my goal of letting the courts know who I had become through all the trials and tribulations, that I was a stronger woman because of it. And the ultimate goal was accomplished. Expungement was granted. Two down, one to go!
Leaving that courthouse, I felt overwhelmed with joy, sheer exhilaration! When I got home, my emotions got the best of me. I could not stop crying from the joy and freedom I felt. Going to the hearings was the best choice I could have ever made. It made me a part of my life changing experience. Once I was composed again, I decided to take myself shopping to celebrate. Thank you LARRP, NDICA, and the tireless team of LA County Public Defenders led by Ms. Pam Johnson. This has changed my life forever! Last and final Expungement #3, here I come. Look out world. Sugar is on her way.
Posted in Troy Vaughn Posts, Uncategorized and tagged Expungement, LARRP