My final perquisite is that of LIBERATION. One of the greatest liberators and liberation movements in history was that of the Dr. Martin Luther King, Jr. and the civil rights movement during the 1960s. We should take stock of those times and learn from them, because the struggle for liberation is as real today as it was then. I would love to say that the efforts of Dr. King and others that served with him paved the way for complete liberation for people of color, but then I wouldn’t be writing this blog. The monster of racism clearly has many heads, and every time one has been bitten off, another one has arisen. The hot violence of blatant slavery has been replaced with a slave engine that is embedded in the bricks and mortar of mass incarceration and the prison-industrial complex. 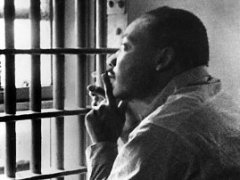 We’ve all heard the story of the “40 acres and a mule” promise to former slaves. It’s a staple of black history lessons, and it’s the name of Spike Lee’s film company. The promise was the first systematic attempt to provide a form of reparations to newly freed slaves, and it was astonishingly radical for its time, proto-socialist in its implications. In fact, such a policy would be radical in any country today: the federal government’s massive confiscation of private property — some 400,000 acres — formerly owned by Confederate land owners, and its methodical redistribution to former black slaves was the proposition.

Sadly, this astonishingly visionary program, which would have fundamentally altered the course of American race relations was overturned in the fall of 1865 by Andrew Johnson, Lincoln’s successor and a sympathizer with the South. He returned the land along the South Carolina, Georgia and Florida coasts to the planters who had originally owned it — to the very people who had declared war on the United States of America. Let this be a lesson for us. When the leaders of our government become sympathizer with those that seek to enslave and declare war on us, it’s only a matter of time before they own the land.

As we can we see reparations are not a radical idea; they’re considered a basic tenet of social and political policy throughout the world. Why should America not pay reparations to repair the damage done to people of and communities of color? It’s not as though the effects of slavery is over now; if anything, the problem has grown within the cells and psyches of every generation since.

Liberation will never come to America, and we will continue to waste money on relatively limited fixes, until we come to terms with and finally pay this debt. Today we must insist that reparations are built into every piece of legislation that is crafted to dismantle the effects of the war on drugs and mass incarceration. Reparations that would allow for a massive investment in educational and economic opportunities for African Americans — rendered as payment for a long overdue debt.

America will never be free until that debt is paid, the cycle of violence that began in the 1600s and continues to this day will continue to haunt our psyche and disrupt our social good. It is time for America to atone for our past in both word and deed, and to heal our weary soul. Recognition leads to repentance, and repentance leads to reconciliation!