The problems of equality faced by America today are many, but none more prevalent than that of my second prerequisite of LOYALTY.  Here in America we all are familiar with the phrase “I PLEDGE ALLEGIANCE…”   It denotes a promise to be loyal, but what is loyalty?

The misconception about being loyal to a person or a nation is to make loyalty equivalent to going along with whatever the person, or whatever those running the nation, wants to do.   I’ve come to believe that sometimes for us to be truly loyal, we must stand in opposition to another thing or even the status quo.   An example of this would be if your friend was drunk and unable to drive, would you let him/her drive?  A loyal friend would stand in direct opposition of them driving their vehicle under the influence of a controlled substance, because it is dangerous to them, and others on the road. 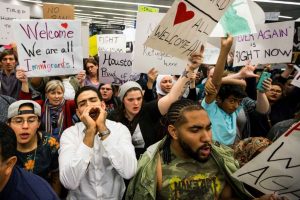 Today, our government is under the influence of a lie and a web of hypocrisy.  When we look at, and judge American history— the truly loyal Americans were the people who disobeyed the inhumane laws, laws like that of the Fugitive Slave Law.   This law was set to inform on a slave attempting to escape to Canada, and have them returned to their Southern master.  The question is if you obeyed the law and had a black person sent back into slavery, were you showing real allegiance to America?  Or were you disloyal to what America truly is, even though millions of people seemed to agree with you?

A person like Henry David Thoreau sought to answer this question as we all must.  He helped slaves escape, and was classified as a lawbreaker. But I say that it was he, and not the passers and observers of the Fugitive Slave Law, who was faithful to America.   Like Thoreau, for us to be loyal in America today, we must be willing to stand up and resist faulty, criminal-justice, drug and immigration laws that attempt to dismantle what this nation is truly meant to be.

The highest purpose of every human should be to look at their neighbor, and see themselves, and then to project that self-realization into the world.  We all should see rightly the world itself, and work to correct the wrongs we see and strengthen what is right.  That purpose in someone  is exactly what deserves our loyalty.  Loyalty to a person is to encourage the person’s care for the world, and fairness to the world. Certainly, if we are truly loyal we will want to counter anything—from the outside or from the person themselves—which hurts them and makes them weaker.

The questions before us my friends are:  Is America made weaker or stronger by its Pledge of Allegiance?  Does America now even know what loyalty means?  If a pledge is to be said, then the people saying it, of whatever age, gender, race, belief, ethnicity, sexual orientation should be encouraged to look deeply, and exactly at the meaning of every word. Otherwise it becomes an ego caress, or a contemptuous routine—with contempt for the statement itself, for America, and for the world.   Maybe, just maybe America’s reputation is questionable throughout the world today, because it has proven itself to be double-minded on its own creeds and allegiance to all its people!