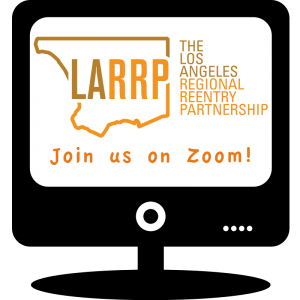 And here are some links and info people requested on topics raised during the discussion:

Town Hall July 15th
Thanks to all LARRP members who took action on the recent Reform LA Jails petition (maybe link to petition?) to call on CA Attorney General Xavier Becerra to open an independent investigation into recent hangings of Black men in our North County desert communities.

Long term support and relentless attention is needed to fight decades of entrenched racism and discriminatory policing practices (maybe link article here) by the LA Sheriff in the Antelope Valley.

To that end, please spread the word and turn out for the upcoming July 15th Townhall of the combined Lancaster and Palmdale Community Advisory Committees, which monitor the federal DOJ settlement agreement over racially biased policing in the AV.

Join Root & Rebound for a training on Fair Chance Hiring--hiring policies that require all applicants be given the opportunity to introduce themselves and their qualifications for the job before running a background check and assessing a conviction. 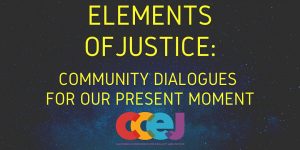 by California Conference for Equality and Justice

CCEJ’s Elements of Justice community dialogue series has been created to process the perspectives and questions currently emerging about race, racism, and the value of Black Lives.

Tuesday August 11th 9-10am.
Training will go over all information needed to reverse an Opioid overdose.
This training is open to all- members of the community, agency staff, etc. Anyone can easily save a life with learning how to administer Naloxone!
To register, please e-mail  acowan@clarematrix.org

Shaking up Reentry
POSTPONED Until 2021 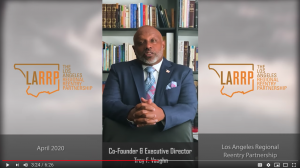 Please note: LARRP General Meetings and other events are open to the public. By attending, you consent to having your voice and likeness recorded, photographed, posted on LARRP's website and social media, and included in LARRP's materials and publications for noncommercial purposes. If you don't want to be photographed or recorded, please let the facilitator know so you can be seated accordingly.

LARRP now has an extensive resource page devoted to COVID-19
We are updating it Daily!!!
CoronaVirus Info and Resources

California Gov. Gavin Newsom famously proposed closing 2 state prisons in his most recent budget proposal. But now, it's no longer clear whether he will prioritize closing "state-owned and operated" prisons or privately owned facilities that the state leases.

Join us to tell Gov. Newsom you want him to close California-owned and operated prisons!

Keep up with the Board of Supervisors meetings, motions and resources at LARRP Steering Committee member, Joseph Maizlish’s site

National Survey for People with Incarcerated Loved Ones During COVID-19

Essie Justice Group and Color of Change are asking for people with incarcerated loved ones to share their experiences of having someone incarcerated during the COVID-19 pandemic through their national survey.

The team at Root & Rebound is grateful to the many partners and CBOs who have filled out the Reentry Services Provider survey form, so we can better coordinate statewide support to people coming home from incarceration in California during the COVID-19 pandemic.
HERE are the responses to this survey, which include reentry services in counties across the state.

Survey: Employment and Application Experiences with A Criminal Record

Root and Rebound wants to support YOU in getting a job you want. Many employers unfairly consider records in the hiring process -- and their consideration may even be illegal under state law.

We created this survey to better understand your experience in applying for jobs in order for us to support you and others with criminal records as you apply for employment.

provides an array of comprehensive supportive services to address the barriers to reentry for justice-involved individuals, particularly those on adult felony supervision, their families and the community. Such services include but are not limited to housing, employment, legal aid, educational support, mental health assessment and linkage, substance use counseling, and health and healing through the arts. The services are provided in a welcoming environment by county partners and community-based organizations that are considered leaders in reentry and experienced professionals with high risk communities. 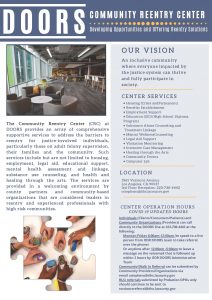 For an archive of reentry and criminal justice related news, please see our News Archive which goes back years!

KTLA5, July 7, 2020
by: Kristina Bravo, Sara Welch
The Los Angeles County Board of Supervisors on Tuesday voted to initiate a plan to close the Men’s Central Jail in downtown L.A. within the year, officials said.

As COVID-19 infections spread rapidly through California’s prisons, authorities on Monday announced the replacement of the state correction system’s top medical officer, and Gov. Gavin Newsom criticized an earlier decision to transfer hundreds of inmates from a Chino facility that had been battling an outbreak.
Read More

COVID-19 and the need for justice reform are twinned crises 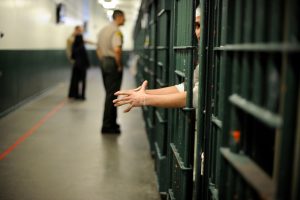 For Advocates, $25 Million Cut To LAUSD Police Is Just The First Step. For Others, It's Already Too Much. 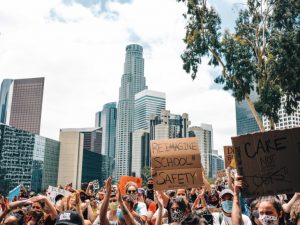 It's been an eventful week at the Los Angeles Unified School District.

After a 13-hour marathon meeting on Tuesday, the Board of Education voted 4-3 to reduce the $70 million school police budget by $25 million, or about 35%. Less than 24 hours later, the district's police department chief, Todd Chamberlain — who was appointed to the job in November — announced his resignation.

By The LA Times Editorial Board, June 29, 2020
...At issue is whether now, at a time of growing public distrust of law enforcement, county sheriffs will be able to cling to an irresponsible and outmoded vision of unassailable power — or whether they will instead be subject to oversight...

In L.A., Black activists debate the value of dialogue with police in reform efforts 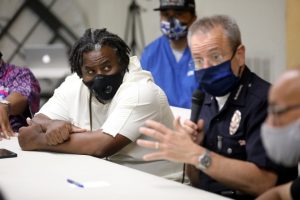 LA Times, June 29, 2020
By Leila Miller...The 90-minute forum reflects significantly different approaches within the Black community toward how to create lasting change from the unrest...

To reform or reconstruct?

Young Black activists, challenging ‘respectability politics’ of their elders, give voice to a new movement for social change
LA Times, By Sarah Parvini

Pastor Eddie Anderson was sensing a generational split among his fellow Black activists, and it frustrated him.

Reuters, June 29, 2020
By Carey L. Biron
WASHINGTON (Thomson Reuters Foundation) - When Livia Pinheiro got out of prison, she had been held for more than a decade - first by the state of California, then by the federal government and finally by immigration officials. When it was all over, she had no home to go to.

...In recent years, California has implemented a number of significant reforms that were not motivated by racial disparities but might have narrowed them in a number of ways. In this report, we extend our previous arrest work to examine the impact of Proposition 47, which reclassified a number of drug and property offenses from felonies to misdemeanors, on racial disparities in arrest and jail booking rates and in the likelihood of an arrest resulting in a booking.

While significant inequities persist in California and elsewhere, our findings point to a reduction in pretrial detention and a narrowing of racial disparities in key statewide criminal justice outcomes 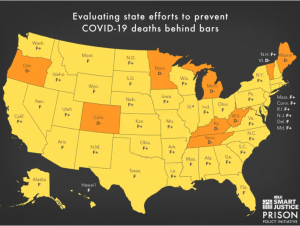 Prison Policy Initiative and the ACLU, June 25, 2020
By Emily Widra and Dylan Hayre

The results are clear: despite all of the information, voices calling for action, and the obvious need, state responses ranged from disorganized or ineffective, at best, to callously nonexistent at worst. Even using data from criminal justice system agencies — that is, even using states’ own versions of this story — it is clear that no state has done enough and that all states failed to implement a cohesive, system-wide response. 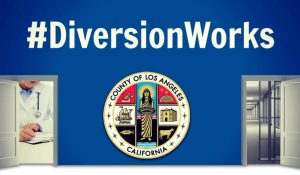 Los Angeles, CA—Today, the Los Angeles County Board of Supervisors backed a proposal by Supervisor Janice Hahn and coauthored by Supervisor Hilda Solis to consider reallocating funding provided to the county through AB109 from the jail system to alternatives to incarceration.

“This moment is a once-in-a-generation opportunity to get away from our over-reliance on incarceration and invest in treatment and services,” said Supervisor Janice Hahn, who authored the motion. “We cannot police our way out of all of our problems—whether that be mental illness, or poverty, or addiction. I want to look critically at the State funding that we currently give to our jail system and see if there is a smarter way to spend this money.”

By Michael Balsamo, June 15, 2020
WASHINGTON (AP) — The Justice Department has set new dates to begin executing federal death-row inmates following a months long legal battle over the plan to resume the executions for the first time since 2003

In this episode of The Sunday Read, one man reflects on what it was like to go to prison as a child and to attempt to become an attorney upon his release. In doing so, he asks: What is punishment in America? What is it for? And how should we think about it? 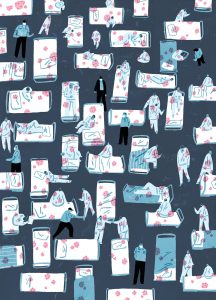 In a penitentiary with one of the U.S.’s largest coronavirus outbreaks, prison terms become death sentences.

Politico, 06/10/2020
By Jeremy B. White
OAKLAND, Calif. — The widespread fury over George Floyd's death provides a sudden window of opportunity for a national movement that has tried for years to remake the criminal justice landscape through high-profile prosecutor races around the country.

In Los Angeles and a series of contests in Florida and New York, campaigns hope that demonstrators and their allies can supply critical votes in November, converting a generational outpouring of activism into district attorneys with the will and authority to prosecute police officers and advocate for broader policy changes. 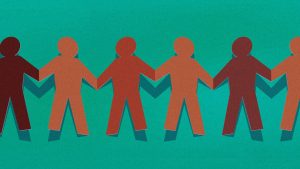 Probation Conditions Relaxed During The Pandemic. Some Say They Should Stay That Way. 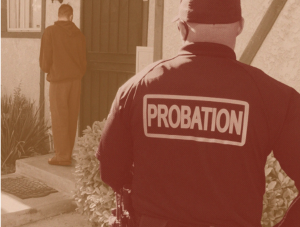 The Appeal, by Lauren Lee White
Jun 08, 2020
Public safety is not improved by stricter probation and parole rules, researchers have found. 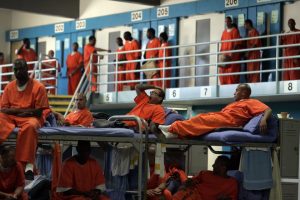 A Series of 3  Editorials from the LA Times